What is build file

Ant uses an xml file for its configuration. The default file name is build.xml. Typically, Ant's build file, build.xml should live in the project's base directory. But you are free to use other file names or place the build file in some other location.

Let us create our first task.create a file called build.xml anywhere in your computer and copy the following lines into this file.I have created this file in D:\antexample

The "Build" is a process that covers all the steps required to create a "deliverable" of your software. In the Java world, this typically includes:

Open the command prompt and navigate to the folder where the build.xml resides, and type ant.You should see the following output:

Now we've got a working build file, let's take a closer look at it's contents:

For my install I used the following values.

This example will show you how to use Ant to compile and run a Java program,by using ant.Follow the steps mentioned below for this sample example.

Create a directory and name it to antfirstexample in any of your local drive.Everything will go inside this directory like: source files, created output files, and the build file. All new Java/Ant projects should start this way.

Now create a java class Test.java and add following code into this file

We are going to write Ant Script to compile the program.build.xml file is mentioned below.

By convention, all Ant build files should be called build.xml, unless you need two or more build files to be in the same directory

If you're not familiar with XML syntax, I recommend you read up a little on it first, so you know what elements, attributes, tags, closing tags, and comments look like. It's very similar to HTML syntax. But more formal You know XML? Great. Let's break this down line-by-line:

At the top of the tree is a

Under the <project> element there is a child <target> with the name compile. A target represents a single stage in the build process. A build file can have many targets, each of which must have a unique name.

The build file’s compile target has two XML elements, one is <javac> and other <echo>.javac calls the javac compiler to compile Java source; the other echoes a message to the screen.The compilation task has one attribute, srcdir, which is set to “.” and which tells the task to look for source files in and under the current directory. The second task, <echo>, has a text child node that will be printed when the build reaches it.

Open the command prompt and navigate to the folder where the build.xml resides, and type ant.If the build file has been typed correctly, then you should see the following output on cmd: 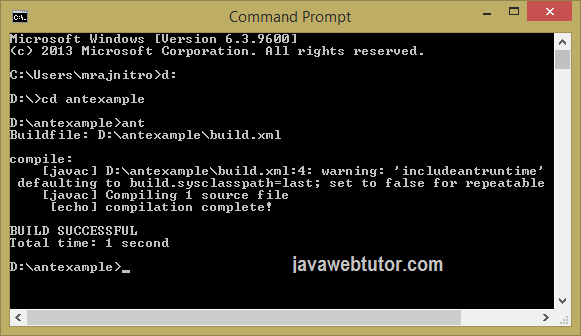 In the above screen Ant has compiled the single Java source file in the current directory and printed a success message after that.