In Java we can store data using Arrays. Size of Array is fixed which is defined during initialization of the array.I real time, developer require a data structure which is flexible in size, so that data can be added and removed from this data structure on request. To avoid that every developer has to implement his custom data structure which requires more coding effort. The Java library provide several default implementations for this via the collection framework.

A collection represents a group of objects, known as its elements. Collections in java is a framework that provides an architecture to store and manipulate the group of objects.

All the operations that you perform on a data such as searching, sorting, insertion, manipulation, deletion etc. can be performed by Java Collections Framework. 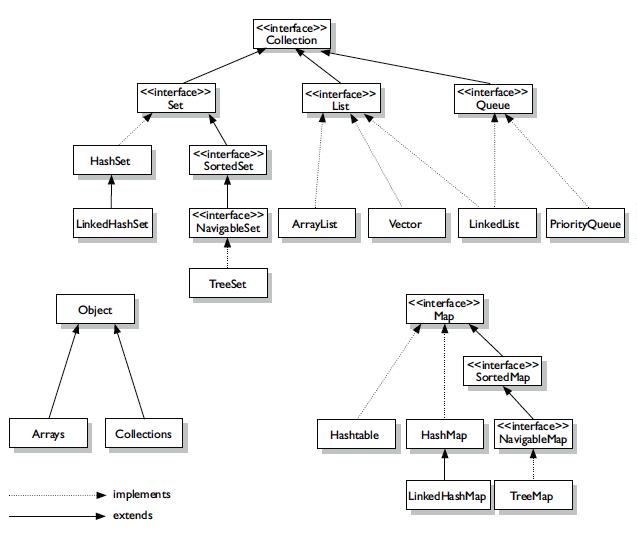 It is at the top of collection hierarchy and must be implemented by any class that defines a collection. Its general syntax is given below.

Iterator interface provides the facility of iterating the elements in forward direction only.

There are only three methods in the Iterator interface. They are mentioned below.

It extends the Collection Interface, and it will store element as sequence. It will allow random access and insertion, based on position.It allows Duplicate elements. Following is its general declaration.
interface List < E >

A List is an ordered Collection and it can contain duplicate elements. Elements can be inserted or accessed by their position in the list, using a zero-based index.

It doesn't define any method of its own. It has two sub interfaces, SortedSet and NavigableSet.

NavigabeSet interface extends SortedSet interface, and allows retrieval of elements based on the closest match to a given value or values.

The three main implementations of the Set interface are HashSet, TreeSet, and LinkedHashSet.

It extends Queue interface and declares behaviour of a double-ended queue. Its general declaration is,